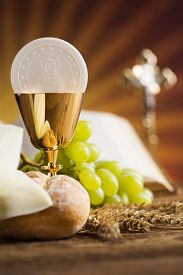 The Most Blessed Sacrament, or the Body and Blood of Christ, is a devotional name used in the Catholic Church to refer to the Host and wine after they have been consecrated in the Mass, into the Body and the Blood of Christ. Roman Catholics believe in the real presence of Jesus Christ in the Eucharistic elements of the bread and wine, and hence carry out Eucharistic adoration. This belief is based on interpretations of biblical scripture and tradition. In the Catholic tradition, Christ’s presence is believed to be both corporeal and spiritual.

The Blessed Sacrament may be received by Catholics who have undergone the First Holy Communion (ie., given by a priest or other Minister of the Eucharist to a Catholic and consumed by the communicant) as part of the Liturgy of the Eucharist during Mass. The person receiving the Eucharist should be in a “state of grace,” i.e., have no mortal sin on their conscience at the time of communion (Matt 5:23-24).

The Blessed Sacrament can also be exposed (displayed) on an altar in a Monstrance. Rites involving the exposure of the Blessed Sacrament include Benediction and Eucharistic adoration. According to Catholic theology, adoration of the host is not the adoration of bread, but of the Body and Blood, Soul and Divinity of Christ, who is transubstantiated in it. Catholics believe Jesus is the sacrificial lamb of God prefigured in the Old Testament Passover. Unless the flesh of that Passover sacrificial lamb was consumed, the members of the household would not be saved from death. As the Passover was the Old Covenant, so the Eucharist became the New Covenant. (Matt 26:26-28), (Mark 14:22-24), (Luke 22: 19-20), and (John 6:48-58).