The Sisters of Mercy are an international community of women religious vowed to serve people who suffer from poverty, sickness and lack of education with a special concern for women and children. 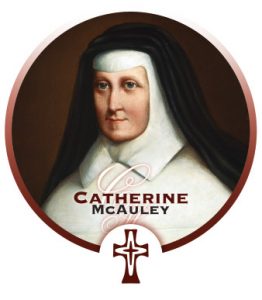 Catherine McAuley, an Irish Catholic laywoman, recognized the many needs of people who were economically poor in early nineteenth century Ireland and determined that she and women like her could do several things to relieve their suffering. With an inheritance she opened the first House of Mercy on Lower Baggot Street in Dublin, Ireland, on September 24, 1827 as a place to shelter, feed and educate women and girls.

Catherine’s original intention was to assemble a lay corps of Catholic social workers. Impressed by her good works and wanting the work to continue after her death, the Archbishop of Dublin suggested that she establish a religious congregation.

On December 12, 1831, Catherine and two companions took their vows and returned to Baggot Street as the first Sisters of Mercy.

Catherine was born in Dublin, Ireland, in September, 1778 to a prosperous Catholic family. Though her father, James McGauley, died in 1783 when Catherine was just five years old, his compassion for the poor, especially children and families who lived nearby, was a lifelong example for his eldest daughter.

Fifteen years after her father’s death, Catherine was orphaned in 1798 and chose to live in the home of relatives, some of whom were non-Catholic and had little tolerance for her pious practices. In 1803 Catherine was invited to live in the home of William and Catherine Callaghan as a companion to Mrs. Callaghan. The Callaghans were childless and upon Mr. Callaghan’s death in 1822, Catherine inherited their fortune: about £25,000, their estate, “furniture and plate.”

In 1824, Catherine used her inheritance to lease property on Baggot Street, a fashionable neighborhood in Dublin, for the purpose of building a large house for religious, educational and social services for women and children. Other women, intrigued by the house and the work for which it was intended, were attracted to Catherine and began to join her preparations for the ministry she planned.

On September 24, 1827, the Feast of our Lady of Mercy, the first residents came to live in the house they called the House of Mercy in honor of the day and two years later the Chapel was dedicated. Ultimately, recommended that they form a religious Institute. Though this was not her original intention, Catherine accepted the advice and began the founding of a new religious congregation of women dedicated to service to the poor.

Catherine and two of her associates entered the Convent of the Presentation Sisters in Dublin on Sept. 8, 1830, to begin formal preparation for founding the Sisters of Mercy. Fifteen months later the trio pronounced vows of poverty, chastity and obedience, and to persevere until death in “the Congregation of the Sisters of Mercy.” Thus the new community was founded on Dec. 12, 1831.

Catherine lived only ten years as a Sister of Mercy but in that time she established nine additional autonomous foundations in Ireland and England, and two branch houses near Dublin. When she died in 1841 there were 150 Sisters of Mercy. Shortly thereafter, small groups of sisters left Ireland at the invitation of bishops in Newfoundland, New Zealand, the United States, Argentina and Australia.

The first Sisters of Mercy arrived in the United States from Ireland in 1843 at the invitation of the Bishop of Pittsburgh, Pennsylvania. Their energy in ministering to the sick and economically poor attracted many new members. 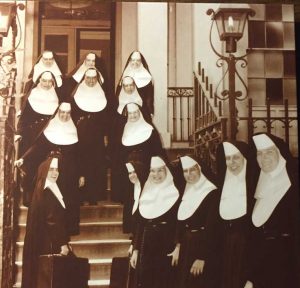 In 1845, three Sisters of Mercy arrived in Savannah and began  St. Vincent’s Academy. Over time there mission expanded. In 1875, the Sisters responded to the plight of sick seamen in Savannah and were contracted to operate the Forest City Marine Hospital. Better facilities and more space soon prompted a move to downtown Savannah, and the hospital was renamed St. Joseph’s Infirmary. Today, St. Joseph’s Hospital is one of the premier health institutions in the South, and continues to be sponsored by the Sisters of Mercy.

In 1939 three Sisters of Mercy began Blessed Sacrament School. Despite the fact that the Sisters are no longer a daily part of our school operations, their mission, values, and commitment to excellence remain an active component of our collective ancestral intelligence.

By 1854, sisters had come from Ireland to settle in New York and San Francisco, California, and continued to spread throughout the country, establishing schools and hospitals. In 1929, 39 of the 60 independent motherhouses in the United States formed the Sisters of Mercy of the Union. This amalgamation united more than 5,000 sisters into six provinces.

The Vatican II Council called upon the Sisters of Mercy to read “the signs of the times” and reconnect with the charism of their foundress, Catherine McAuley. In the 1960s and 1970s, the members revisited the caring, creative and practical spirit of Catherine McAuley. Sisters were encouraged to respond to the diverse needs of contemporary society and, as a result, many began working in ministries beyond healthcare and education, including housing and social services.

The Sisters of Mercy of the Americas are located in North, Central and South America; the Caribbean; Guam and the Philippines, with more than 4,000 sisters responding faithfully to the needs of the economically poor in these countries.

There are now Institutes, Congregations and Federations of Sisters of Mercy in:

For more information on the Sisters of Mercy, please visit www.sistersofmercy.org