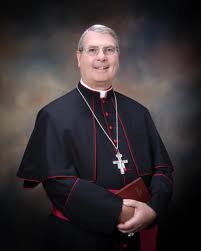 The Bishop’s office is responsible for the spiritual well-being of Catholics in south Georgia as well as the day-to-day administration of the Diocese of Savannah.

Bishop Hartmayer is the fourteenth Bishop of the Diocese of Savannah. He was born in Buffalo, New York and is the son of Sally and the late John W. Hartmayer, he has two brothers, C. Douglas and John, and one sister, Mary Jo Kotacka.